“Everyone carries something”: Local artist creates powerful mural for our times 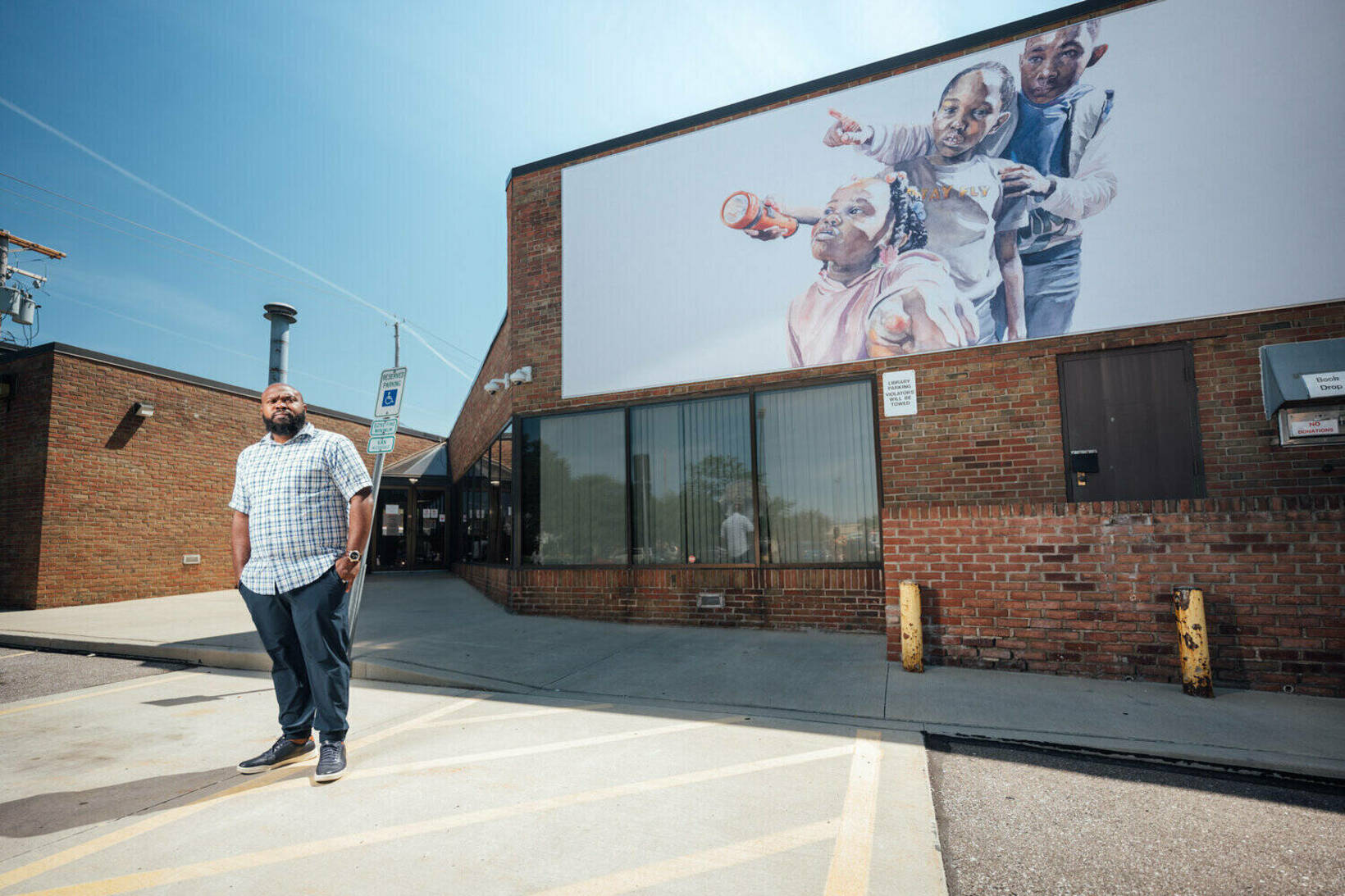 Darius Steward in front of his new mural at the Lee-Harvard library branch.

Every year, Cleveland Public Library and LAND Studio create a new, temporary public art installation at the Eastman Reading Garden downtown. This year, however, the “See Also” program is also being extended into the city’s neighborhoods, and a large new mural by artist Darius Steward recently went up at the Lee-Harvard branch at 16918 Harvard Ave.

Recently. The Land caught up with Steward about what’s behind this powerful, engaging new work.

Tell us more about the mural you just installed at the Lee-Harvard branch of CPL.

This mural is part of See Also, which is organized by LAND Studio. I’ve done work with LAND in the past. I got a call from them asking me if I would do sculptures for the Eastman Reading Garden. The mural elaborates on the themes I’m working on in the sculptures. I live not too far from the Lee Harvard library, so this is also my neighborhood.

I graduated from Cleveland School of the Arts in 2003. Then I finished my undergraduate degree from Cleveland Institute of Art in 2008. I went to University of Delaware for my Master’s in Fine Arts, graduated in 2010 and came right back home. I’ve been working here ever since.

Are you a full-time artist?

What inspired you to do this work?

This work started out in 2016 with a body of work called Baggage Claim. It was after my mom passed. You know when you clean out a dead loved one’s house, and it’s just a bunch of bags you have to clean out, right? I was dealing with my mom’s loss and also seeing her stuff now that she was gone, and I got this idea of how we see each other’s baggage. I know we all have it. So, if we could see it, what would that be like?

This series now, A Search for New Beginnings, is about letting go of our baggage and looking to the future. The painting at Lee Harvard is my two kids and my nephew, and they’re looking for new beginnings.

The last two years, I lost my brother-in-law, I lost my uncle, not to mention all of the injustices in the world. Part of it is, can we ever have the conversation that allows us to move past that? And also, it’s saying that the kids are going to move forward, they’re going to be the guides for me. It’s like they’re saying: Get your stuff together, we’ve got to move forward.

Who’s in the painting?

My nephew is in the rear, and then there’s my son, who is 9, and my daughter, who is 4. My daughter loves art. She’s always happy and excited to see it. My son is my biggest critic. He’s to the age now where he thinks about his image. So, he’s always telling me what he thinks I should do. Sometimes he’s even right, but I won’t let him know that!

So, what does this idea of “baggage” represent to you?

I started the artwork to create a dialogue around race and identity. If we have a starting point, we can create a dialogue and maybe start to break from some of these barriers. It’s based on coming to a place where we’re all carrying something.

I think of all the stuff my mom carried around. She was a single parent and an orphan. It’s based on seeing how she had to proceed through life. She assured that my kids would have something different.

Baggage is what you have to deal with every day. It might be your student loans you have to pay off. I have a painting of my son dumping out a bag full of toy cars, and that kind of symbolizes my car debt. I feel like everyone carries something. We might even see we have similar baggage.

I still gotta pay my car note. I don’t know if I can necessarily get rid of it. It’s a space to grow from, so I can move forward. We all deal with a hell of a lot of baggage.

How did you create the artwork?

It’s a watercolor painting on a piece of paper. I use Arches watercolor paper, really good paper. Then I got a great quality scan and put it in Photoshop. We printed it on vinyl and stretched it onto the aluminum frame. That takes some of the challenges out of it, but I still have to get it right.

Is the painting based on actual photos?

All of my work is somewhat based on photographs. I take photos and make changes to them. My daughter doesn’t like to be an easy pose for me! Fortunately, my phone allows for live photos. But afterwards, I have to alter and transpose them. So, there’s a composing and arranging aspect to this, and that’s part of it.

Darius Steward’s mural will be a semi-permanent exhibition at Lee-Harvard library. Check it out at 16918 Harvard Ave. Cleve. 44128.