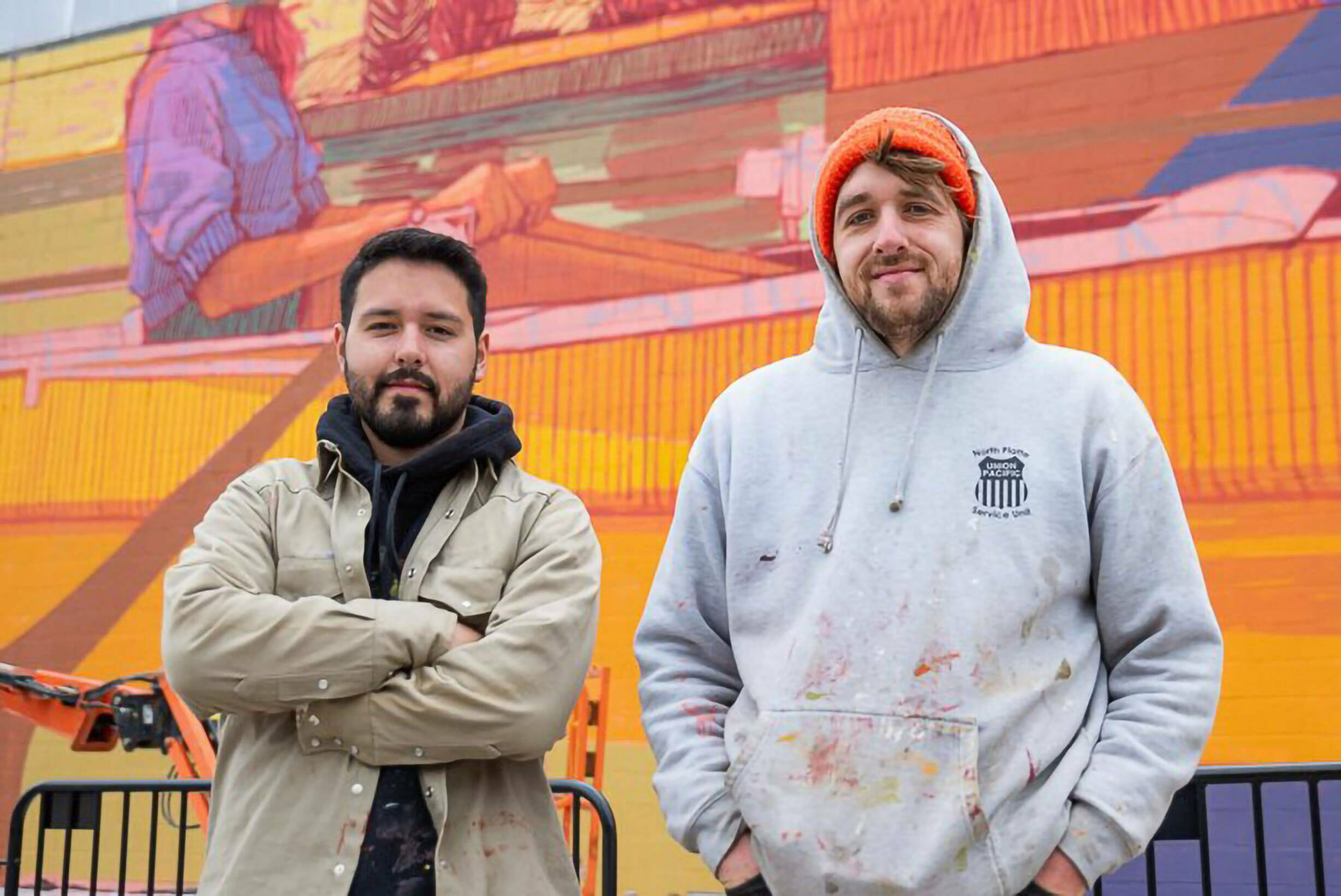 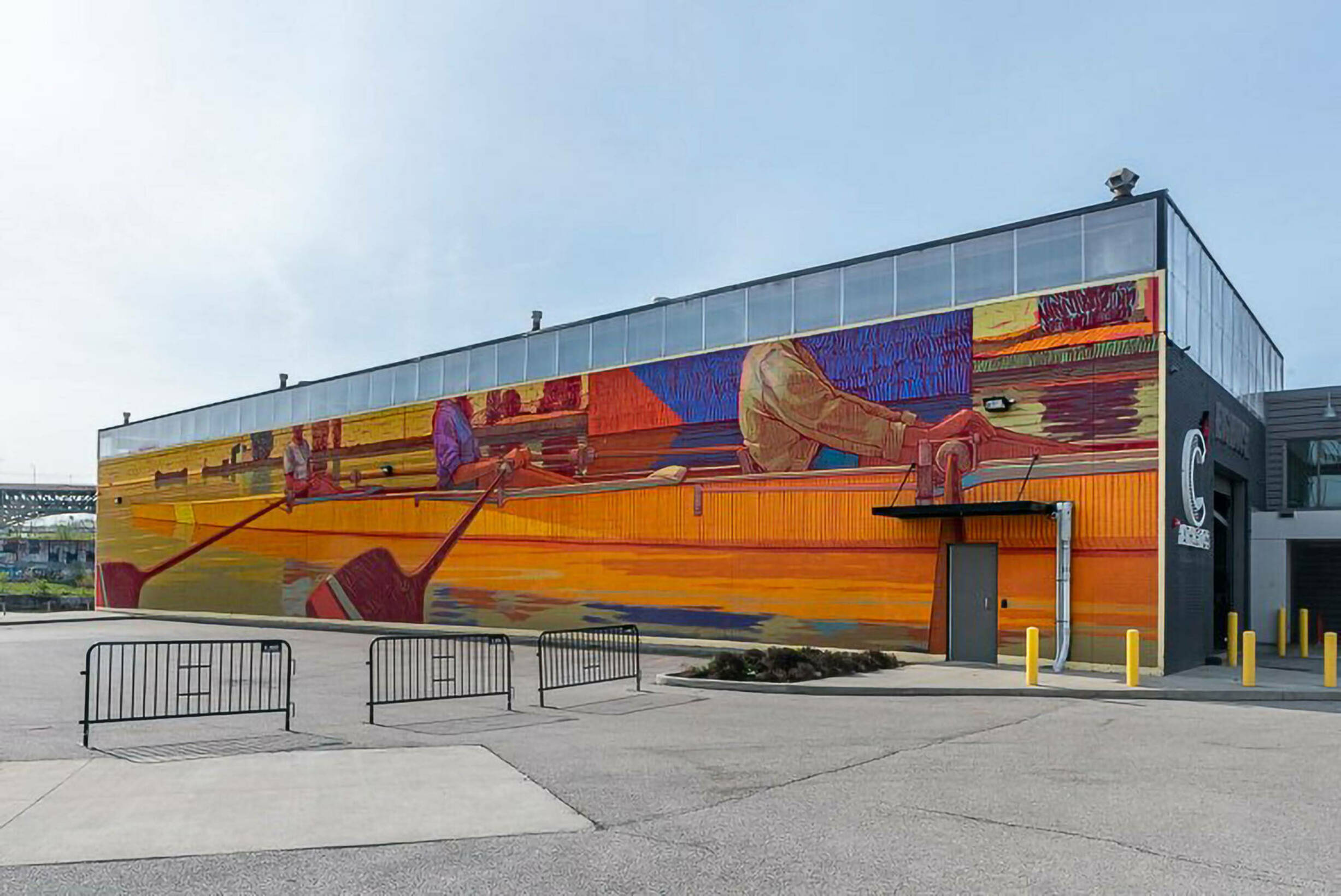 In 2015, The Foundry Community Rowing and Sailing Center hit the banks of the Cuyahoga River in a splash of excitement to make rowing and sailing accessible to youth of all ages and backgrounds in Cleveland.

The initial $9 million transformation of several historic industrial buildings on Columbus Avenue in the Flats has over time grown from an 80,000-square-foot facility, a park, a fitness center and a boat house—all designed around fostering youth rowing in Cleveland— to becoming a sprawling center with indoor rowing tanks and a thriving sailing program.

Now, the Foundry is once again growing with its efforts to introduce the water sports to anyone who is interested, as it pays homage to rowing with a new 150-foot mural on the side of its two-story “Big House.”

LAND studio and The Foundry commissioned Detroit artist Pat Perry to create the enormous mural that depicts a colorful portrayal of rowers sculling down the river. “We are super excited to work with Pat again, because we worked with him on the Red Line [INTER|URBAN] mural project back in 2016,” says Joe Lanzilotta, project manager with LAND studio, who adds that Perry’s 2016 mural was a bit obscured, unless you were riding the Rapid. “His work is fascinating—with a long narrative and detailed. It deserves to have more time spent with it.”

The mural marks the start of a larger space-making initiative by The Foundry, thanks to $850,000 in funds granted from the state’s capital budget. The project includes a public river walk and other improvements that will beautify the area, tell the story of rowing in Cleveland, and create a unique public space for the neighborhood.

“We want to add on to The Foundry’s public access and talk about the history of the river and the lake,” explains The Foundry’s director of business affairs Michael Ferry. “We want to make it accessible to all ages—children and families. We will have signage that talks about The Foundry, the history of rowing, and depictions of racing shells on the Cuyahoga River.”

Ferry says the mural is the perfect fit for his overall vision. “You’ll be able to see it from the river as you got up the river out to the lake,” he says. “The Goodtime II goes by all the time, and you can see it from Brew Dog. You’re going to be able to see this mural from a lot of vantage points. We really think it’s going to be a spectacular addition to the campus.”

Artist Perry says he could easily see Ferry’s vision and knew what he wanted to paint. “We wanted to do something that made sense with the river being right there,” he explains. “[I was] talking to people at The Foundry and different team leaders about their goals—to work with kids from all different socio-economic backgrounds.”

Therefore, Perry says he wanted his mural to emphasize diversity. Rowing is kind of viewed as a rich kid sport, or not accessible to all, so we wanted to show that people in the boats don’t all look alike,” he says. “I featured teens of different physical strengths, but they fit in with what they were supposed to be doing. The mural has less to do with physical power and more to do with how people work together.”

Lanzilotta adds the amount of detail in the rowing mural is impressive. “It really is a standout piece,” he says. “Perry is one of those artists we will be reading about for the rest of our lives—he’s that talented.”