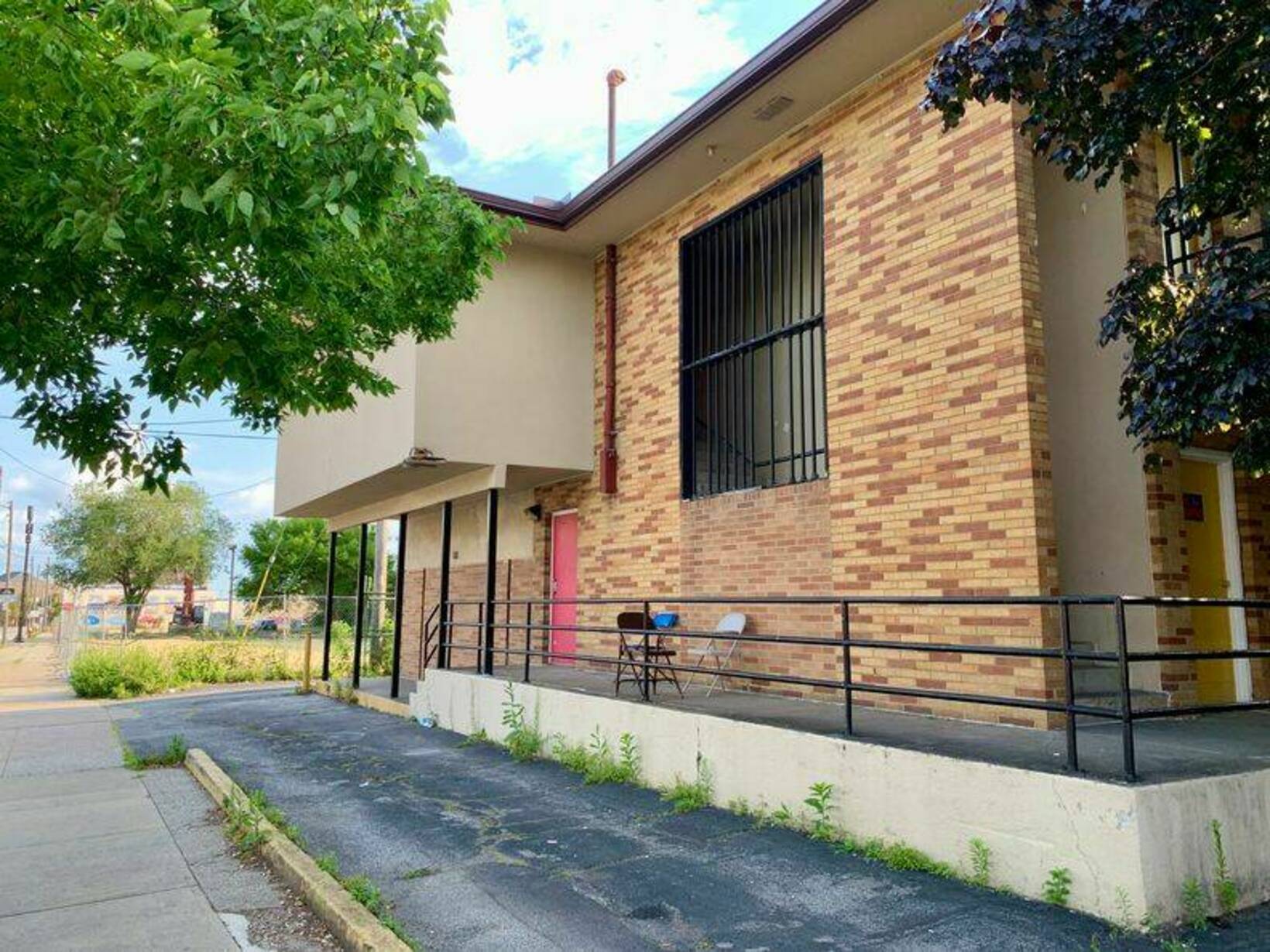 The former Front Steps building, on West 25th Street in Ohio City, changed hands this month as part of land assembly for the Irishtown Bend hillside stabilization project. The adjoining parcels already have been cleared in preparation for regrading and eventual conversion into a park.

The partners behind a plan to stabilize the Irishtown Bend hillside and transform it into a park recently tied up another key piece of land for the project.

Cleveland neighborhood group Ohio City Inc. paid $500,000 early this month for the former home of Front Steps Housing and Services. The modest building, a one-time motel at 1545 West 25th St., is serving as a temporary women's shelter during the coronavirus pandemic.

The real estate deal preserves that safe housing through March 1, 2022, while providing Front Steps with up-front cash. The transaction also secures a critical slice of the hillside, leaving the project team shy of only one parcel — a long-empty building at West 25th Street and Detroit Avenue that's the subject of haggling between the city and owners Bobby and Tony George.

Ohio City Inc. will hold the nearly 1-acre Front Steps parcel until the spring. After that, a subsidiary of West Creek Conservancy will take possession of the property, which is slated to be cleared as part of stabilization work led by the Cleveland-Cuyahoga County Port Authority.

The port is leading the charge on a roughly $45 million effort to shore up the hillside on the west bank of the Cuyahoga River. Shifting soil and insufficient bulkheads pose dangers to a critical federal shipping channel.

Plans developed by the port and Osborn Engineering call for a dramatic regrading of the slope, where contractors will dig out 250,000 cubic yards of dirt — roughly the same amount of dredged material that the U.S. Army Corps of Engineers pulls from the river each year to maintain a path for ore boats.

To keep a $9 million federal grant, the port must be under contract on the hillside work by mid-2022, officials said during a recent interview. The agency aims to start construction early next year. Stabilization work will take 18 to 24 months and will lay the groundwork for the park.

In February, workers razed two former Cuyahoga Metropolitan Housing Authority buildings at the top of the hill. The 60-unit Front Steps building and the Georges' building are the only remaining structures.

Ohio City Inc. and a slew of other organizations spent months working out a deal on the Front Steps site. The housing-focused nonprofit relocated in May to St. Joseph Commons, a new permanent supportive housing project about a mile south on West 25th.

Aided by federal pandemic-relief funds flowing through the city of Cleveland, the YWCA Greater Cleveland has been leasing the old Front Steps facility as overflow housing for homeless women. The sale agreement involved an eight-month extension of that lease, said Tom McNair, executive director of Ohio City Inc.

The acquisition hinged on a $350,000 grant, focused on safe housing and social distancing at shelters, from the Greater Cleveland COVID-19 Rapid Response Fund. Village Capital Corp., the lending arm of Cleveland Neighborhood Progress, provided a short-term loan tied to the anticipated lease payments.

"None of this would have been possible without so many people working together to make it a reality," McNair said.

Sherri Brandon, CEO of Front Steps, said in a news release that the nonprofit served more than 3,500 women during a 35-year run at the site. The group, formerly known as Transitional Housing Inc., was founded in 1986 by four sisters from the Congregation of St. Joseph. The congregation and Front Steps will be honored as part of the Irishtown Bend park.

"With this acquisition, we will be able to maintain supportive housing in the short-term and will take one giant leap closer to realizing a 23-acre, world-class public park open to all Clevelanders," Kerry McCormack, the city councilman who represents the surrounding neighborhoods, said in the news release.

The future of the George family's property, at the northwest end of the park footprint next to the Detroit-Superior Bridge, hasn't been resolved. In early June, design firm Richard L. Bowen and Associates submitted plans to the city for an estimated $4 million redevelopment of the downtrodden building, which supports a prominent — and lucrative — rooftop billboard.

Developer and restaurateur Bobby George, who bought the property in 2018, is proposing to renovate the building as a wellness center. But his father, Tony George, has been negotiating with the city over a potential real estate swap. The behind-the-scenes discussions include both land and alternative billboard sites.

In a memo provided to the port in early 2020, Osborn Engineering wrote that keeping the Georges' building in place could add $4.9 million to the cost of shoring up the hill to meet minimum safety standards. "These added stabilization measures are anticipated to consist of a heavily reinforced and costly structural mid-slope wall," the memo states.

That is money that the partners don't have — and can't reasonably spend, said Will Friedman, the port's CEO.

"As a public agency, I don't know how we would justify the public bearing that additional cost when there's a much less expensive alternative available," he said in June. "I don't have any way to get to that result, from my way of looking at it."

McNair said that talks between the city and the Georges are ongoing.

"From what we've heard, those seem to be productive conversations," he said. "We're all hopeful that a resolution can come."

The port and its partners have amassed more than $24 million for the hillside, or about 54% of the estimated cost of site preparation, dirt-moving, bulkheads, stormwater and drainage improvements, and other stabilization work. The project team recently applied for a second federal grant through the Department of Transportation's Rebuilding American Infrastructure with Sustainability and Equity, or RAISE, program.

Friedman said construction ideally will happen all at once. But the agency, anxious to get started, is open to phasing the job if raising the full $45 million drags on.

"We'll do everything we can to protect the funding we've assembled, the money we've raised, and to get this project built," he said.