Kevin “mr.soul” Harp has been a member of the artistic world since a very young age. Growing up in Cleveland he learned to not let anything turn him away from his purpose. After moving to Atlanta, he has made a name for himself as one of the most sought after graphic artists around. He still adheres to what his childhood taught him, that the only person stopping anyone from achieving anything they want is themselves.

Now as an experienced businessman, his life speaks to perseverance, faith in oneself, and proves that the gifts you’re born with never leave you. In his case his gifts are expanding and changing the art and graphic design world one project at a time.

As a young man mr.soul was exposed to the familiar influences that have claimed the lives and freedoms of many urban youth. The lure of fast money gained through drug distribution, theft and other criminal activity was the norm, but not the driving force within him. He became affiliated and a member of Cleveland’s most elite graffiti crew, D.E.F. (Doin’Everything Funky), which was headed by the city’s proclaimed “king” SANO. His desires to make something of his self enabled him to break out the circle of complacency, deterred him from the many negative influences, and form a straight line to his goals. His first major opportunity came when a day’s cold calling landed him the chance to work with Patchwerk Recording Studios, which gave him exposure to Atlanta’s music scene. A chance run in with Sleepy Brown at Atlanta's Greenbriar Mall meant he would go on to collaborate with some of his musical idols, the Dungeon Family,designing the collective’s official logo. Years later that same logo is still used by them. A vision he once had, became the reality he lives.

The name “mr.soul” first came about when one of his loyal Cleveland clients gave it to him before moving to Atlanta. His client’s name was DJ Centipede, and he would always refer to him as "mr.soul," since the name of his company at the time was Visual Soul. mr.soul never thought much of it as he had a pen name at the time, but when he moved to Atlanta and started working with Patchwerk Recording Studios, the guy who gave him his first shot here, BJ Kerr, also used "mr.soul" as the shortened version of his company name. It was at this point that mr.soul decided to keep it because he felt it defined his style of work, the musical influences for his work, and also his personality. The “216” was added as a reference to his humble beginnings back home in Cleveland.

Today he has an exclusive and impressive clientele list including Beats By Dre, Serena Williams, Interscope Records, Ludacris, and AEGWorldwide, to name a few. mr.soul is simply the chameleon of graphic designers.Whatever the job calls for, he delivers. With aspirations to further his careeras both a graphic artist and fine artist, there's no limit to the doors that will open up. Better yet he will continue to create his own space. “I’d like tobe remembered as the dude from Cleveland’s Lee and Harvard community, that didn’t allow anyone or anything to keep his wings from soaring to the sky. I want to be remembered as an artist or designer who put a great deal of time, energy, and more importantly, soul into his work. I want people to remember which one of my artistic creations, or what set of words or phrases, inspired and motivated them the most,” states mr.soul.

With strong influences such as artist Kevin"WAK" Williams, TP Design, the only African American design company he came across during his humble beginnings, and his City Of Ink art collective, he is reminded what sacrifice looks like. Each of them, as well as others, serve as examples of what sticking to a plan and not accepting defeat is all about, much like his life. mr.soul’s story is a testament to the power of a vision and putting in hard work to bring it to life. He has followed the journey mapped out for him, while adding his own style and design along the way. Where he will end up is left up only to him and his creations. 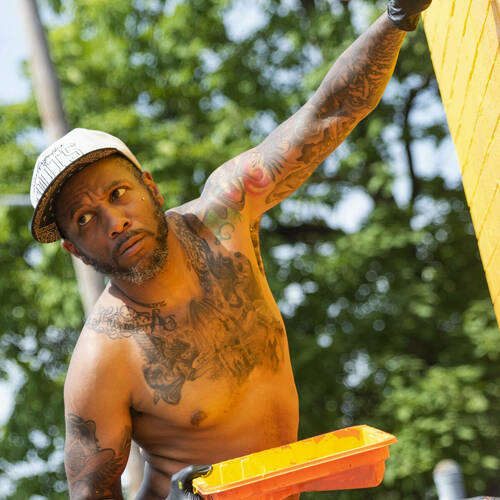 Inner City Hues was initially conceived by a project team made up of artists, residents, business owners, and community activists as a collaborative a...