Jessie Unterhalter and Katey Truhn are a Baltimore based artist team striving to transform public spaces into playful and vibrant experiences. The artist duo met while at MICA in 2001, forming a lasting, creative friendship and artistic collaboration.

Since 2011, Jessie and Katey have been consistently creating large-scale, public murals. The all inclusive and socially engaging nature of creating art for the public is a driving force in their art making. Inspired by the architectural surfaces of each environment, their dynamic paintings often curve around corners and spill onto the ground. Their work explores themes of movement and symmetry, inspired by bold color combinations, patterns in nature, and woven textiles. Over the past two years the team has been exploring tradition batik, hand dyeing, and appliqué methods in their studio where they have created several large scale framed paintings. These painting have been exhibited in Brooklyn, Miami, Baltimore and Russia.

They have been awarded two PNC Transformative Grants to bring their bold geometric paintings to baltimore community. Their unique partnerships with the community earned the team residencies with the The Albright Knox Museum in Buffalo, NY, The Farnsworth Museum in Rockland, ME and the John Micheal Kohler Art Center in Sheboygan, WI.

They were selected for the New York Department of Transportation’s 191st Tunnel Beautification Project in May 2015, and worked with Philadelphia’s Murals Arts Program to create “Summer Kaleidoscope,” a 400ft long floor mural and pop-up park. These projects were covered widely, including articles in the New York Times, Philadelphia Magazine, Huffington Post, Gothamist, Flavorpill, and the Philadelphia Voice. 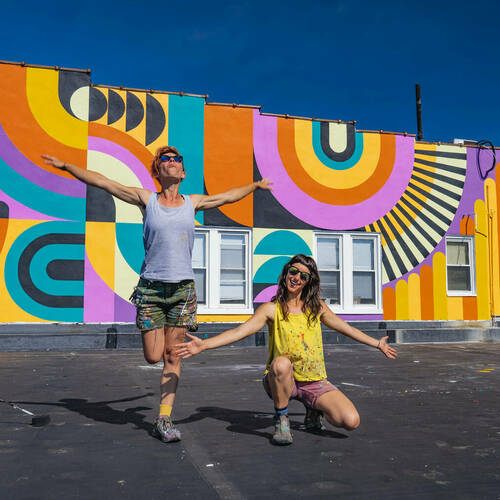