(Born 1961 Miami Beach) Andrew Reach is an abstract artist working in the realm of digital media. He received a degree in Architecture from Pratt Institute in New York and had a successful 20 year career as an architect, practicing in New York City, Los Angeles and Miami. His last building as project architect with HOK Architects was the Patricia and Phillip Frost Art Museum at Florida International University in Miami. In 2003, a spine disease resulted in a spinal fusion of most of his spine and in the fall of 2004, due to complications, at the commencement of construction of the Frost Art Museum, he would undergo a lifesaving surgery marking an end and a new beginning; reinvention from architect to visual artist.

To have some creative outlet he so needed, at the urging of his husband Bruce Baumwoll, he began to learn photoshop to make cards appropriating images from Bruce’s vintage ephemera for his paper ephemera business. But unexpectedly, he began making his own art from scratch. Prior to his disability, Reach’s artistic abilities were always in service to the making of buildings. Now he found himself creating art on a computer program as if the works of art had been inside him all along, waiting for the day technology would come around to realize them. Each of the early works that followed revealed a hidden physical and psychological drama playing out in his body. The richness of the imagery that sprang forth with a limited Photoshop repertoire taught him that more important than whatever tool, it is the imagination, which is foremost—being the source of all creativity. In the spirit of discovery he began to investigate aspects in his art that would give him a way out of his physical self and this art making/art therapy continues as his art has evolved to the present.

His work has been exhibited in the United States in solo and group exhibitions including a solo exhibition at the Frost Art Museum. His work is in private, corporate and institutional collections, among them the Permanent Collection of the Frost Art Museum, University Hospitals Art Collection, Summa Health Healing Arts Collection and the Cleveland Clinic Art Collection. His work in public art includes a permanent installation at the LGBT Community Center of Greater Cleveland and most recently he was commissioned by the Cleveland Public Library in partnership with Land Studio to create “QUADRATALUX’, a 10 x 30 foot art wall for one of its branches as part of CPL’s “SEE ALSO” public art initiative. 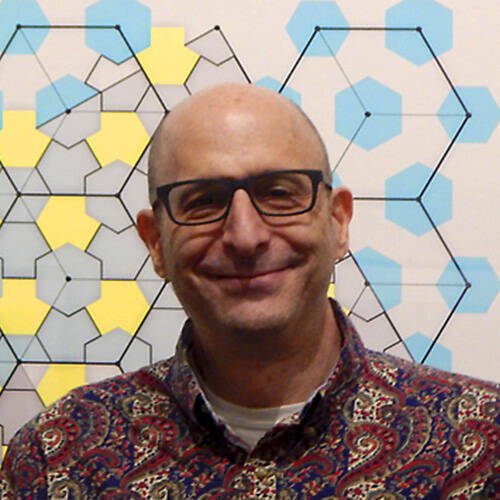 Each year, since 2009, LAND studio partners with the Cleveland Public Library to activate its downtown Eastman Reading Garden with temporary public ar...

Get Social with LAND studio

Follow us on Instagram to check out our latest public art projects, partner shoutouts, calls for artists and more!